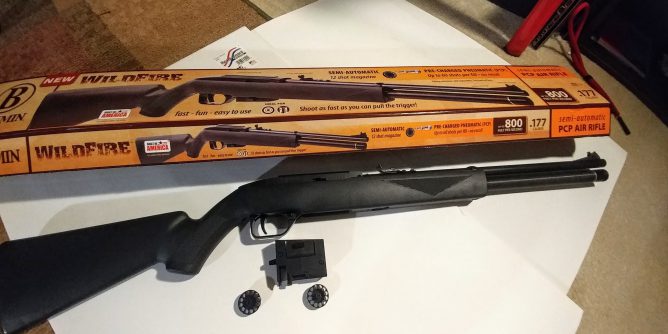 The purpose of this post is to show the Benjamin Wildfire PCP .177 leak that several people have reported.  Clearly Crosman is aware based on their online responses to negative reviews, but they are still shipping the Wildfire from their site.  I read the reviews before buying it so I opted to get it from Walmart to minimize the hassle of returning it.

My started leaking after about 10 or 12 mags full (roughly 120 to 150 shots).  The first time it leaked is was after topping off the gun to 2000 psi and running two full mags. Once I took the mag out it started leaking.  I pumped it back up to 2000 psi, this time it started leaking after shot 11.  I left the gun alone and after about 1 hour it had completely depressurized.  Refilled the gun to 2000 psi and tested in again; same thing after about shot 15.   Repeated the cycle several times and not one time did I make it through two complete mags before the leak started.  As it is starts leaking, accuracy drops significantly. Basically quarter size groups to to DVD size groups for 5 shots at 10 and 15 yards.

Here is a short video that shows how bad the leak is: https://www.youtube.com/watch?v=gFPuYNPJlSg

CROSMAN did not do their homework on this air rifle.

►Fun to shoot while it lasts.
► It’s semi auto (but with a very heavy trigger pull).
► 12 round mag (extra mags are only like $5 for 3)
► Pretty accurate for a plinking PCP (once you get the hang of the trigger pretty easy to put quarter size shots at 20 yards)
►More fun to shoot steel with than paper

►LEAKS:  Shame on Cromsan; quick search of the web reveals this is a known problem yet Crosman continues to  make these available for sale on their website (this is the reason I went with Walmart, because if I had to return due to quality problems it would be easier to take it to the store).
►Trigger is heavy, but it also  has to cycle the mag (kind of like a revolver, there is no blow back).  It is not terrible but if you are used a light trigger and going to use the trigger as the reason you can it a balloon at 25 yards, then the Wildfire might not be for you.
I really had high hopes for this gun, but Crosman really let me down here.  I’m sure they thought they could just lift and shift their 1077 CO2 and grab some parts from thier PCP lines and everything was just magically going to work but that is not the case.  It seems like with a little bit care, some slightly betters screws, seals and a little bit of TLC in the product, they really could have a winner.